Roughly a decade ago Portland acquired a reputation as a city “where young people go to retire,” or at least wait tables and brew coffee while pursuing careers in filmmaking, indie rock and mural painting, well into their 30s.

The unspoken assumption behind the Portlandia stereotype was that this demographic felt no great urgency to settle down and raise families. Building on this assumption as well as census data, Portland’s Bureau of Planning and Sustainability (BPS) put out the word that: “In the future, the average Portland household will be smaller with fewer children per household.”

“My impression is that we are following the national trends, says Tom Armstrong, BPS supervising planner. “My understanding is we’re a little bit lower than other comparably-sized cities in terms of households with children.”

So what if Portland is different? What if those twenty and thirty-somethings of a decade ago actually are starting to settle down and have families?

Very importantly – what if newcomers are more or less likely to be family households?  These questions hold the key to the future of Portland’s housing market and changes that will come to bear on the city’s neighborhoods.

While no one would doubts the city’s population is growing rapidly, identifying the demographic make-up of Portland’s households does not lend itself to easy calculation in between census years.

In the BPS Portland Plan, published in 2011, a dizzying sequence of eight household types are presented in pie charts for every part of the city, with the percentage share of each projected through the year 2035.

“Movers and shakers with kids,” on the other hand, are expected to decrease from 11 percent to 3 percent. (The pie chart for SE shows the percentage of households with children and singles to be virtually unchanged between the two years.) 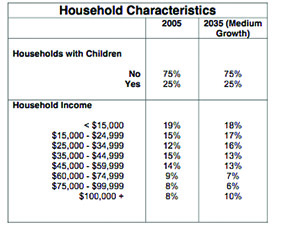 These figures do not specifically account for households shared between unrelated residents – a common arrangement among young singles. Nor do they include concrete empirical data since the 2010 census. Other sources may provide some clues relating to household size. Data from Portland Public Schools indicates that enrollment in pre-K through 5th grade increased from just over 22,000 in 2006 to 25,509 in 2016.

There is anecdotal evidence of an increase in preschool enrollment throughout the city in recent years.

Stacy Dunbar, owner of the Aprende Con Amigos pre-school, reports that demand is strong and the school is “90 percent full in [its] second location after being open just over a year.” Several other pre-schools have opened in Portland in the past five years as well.

However, as BPS is quick to point out, overall growth in the number of Portland households with children may still lag behind the growth of households consisting of singles and couples.

“I think that shows up in the development patterns over the last five years, the strong development especially of rental apartments both in the central city and in the inner neighborhoods,” says Armstrong.

He adds only about 10 to 20 percent of new housing in recent years consists of infill development such as duplexes and skinny houses.

Joan Bowyer, a realtor with the John L. Scott company for over thirty years who lives in SE, perhaps sums it up best.

Asked if she’s noticed any change in the demographic of SE homebuyers in recent years, she replies, “Well you have all sorts. You have the single person, you have gay couples, you have heterosexual couples, and you have people with kids. In this area here you have people moving in because of the Belmont School and the Sunnyside School.”

Of course, renters living in the sleek new apartment buildings lining Hawthorne and Division, or Belmont and Stark in the Buckman area, may reasonably ask: what about us?