Jeanne Favini looks back with a mixture of bitterness and embarrassment at the moment she realized she faced an imminent choice between homelessness or moving into her adult daughter’s guest room for an extended visit.

“The landlords specifically said that they felt they were leaving money on the table because these were modest apartments at modest rents,” she explains, “so they started to raise the rents several times a year. None of us had leases. They didn’t do leases.”

Favini was referring to the Chestnut Court apartments on SE Stark, which she had called home for several years.

“They decided they wanted a better class of tenants,” she recalls, and there ensued a brief attempt to form a tenants union.

“They just went ballistic, brought in a battery of lawyers and went for us big-time.”

Within months, most of the tenants, including Favini, had effectively been evicted. That was in 2017, well before Oregon’s (largely feckless) rent control law and Portland’s relocation assistance ordinance went into effect.

According to data compiled by Rentjungle.com, in the six years between 2011 and 2017, the average rent for a two-bedroom apartment increased by 70 percent city-wide (though rents have since seen a modest decline).

Scenarios such as Favini’s prompted voters in Portland to approve a $258 million affordable housing bond in 2016, followed by a $652 million bond in the tri-county Metro area two years later.

Last September, Mayor Ted Wheeler declared that the Portland housing bond was succeeding beyond expectations. With a dozen projects in various states of completion, the bond has provided 1,424 units of affordable housing as of the beginning of this year. That’s more than the 1,300 originally projected for all the funding available.

“This slate of projects not only gets us to our numeric goals, but it reaffirms our commitment as a city to better serving communities of color, to mitigating displacement and to committing our investments in our east Portland neighborhoods,” Wheeler told The Oregonian.

The bond’s projects include both acquisition and upgrades of existing housing, as well as construction of new housing.

Among the former are the Ellington Apartments at 1610 NE 66th Ave. and the East Burnside Apartments, which was a brand new building at the time it was acquired. The Ellington in particular would appear to target one of the main problems that the bond seeks to address.

A link to the Portland Housing Bureau (PHB) site notes that “Before the acquisition, [the Ellington’s] 263 garden-style apartments and town homes were being marketed to higher-income clientele, threatening to displace residents.

“Now, plans are underway to transform all of the units into affordable homes, welcoming at least 80 extremely low-income families and stabilizing hundreds who were previously at risk of losing their housing.”

Of the 10 new construction sites that include bond funding, only one is slated for inner SE. The as-yet un-named project will be constructed on a presently vast empty lot formerly occupied by the Safari Club at 3000 SE Powell.

A spokesperson for PHB says it will eventually “provide 180 affordable units, with a focus on serving families.”

As for the Metro bond, Portland has yet to finalize an Intergovernmental Agreement (IGA) with Metro on the expenditure of funds allotted to Portland.

However, at a February 5 meeting of the Metro bond oversight committee, Molly Rogers, deputy director of the Portland Housing Bureau and point person for both the Portland and Metro housing bonds, stated that Portland’s priority for Metro bond money at this time is to get “existing projects over the finish line.”

The Louisa Flowers apartments on NE Grand Ave. between Hassalo and Holladay is now offering 240 studio, one-bedroom and two-bedroom apartments to prospective residents with a median family income of 60 percent and lower. The building drew funding from a mix of public and private funding, with about 30 percent provided by Home Forward (formerly the Housing Authority of Portland).

This project, named for an early African-American resident of Portland, brings together many of the values that the city hopes to incorporate in its new affordable housing. It is adjacent to both a Max line and bus line, within a half mile walk of the Lloyd Center mall and the Broadway Safeway, and the ground floor is set aside for retail.

Jeanne Favini finally solved her housing crisis by drawing on social capital: her daughter and son-in-law gave her a loan for a down payment on a small house in the Montavilla neighborhood; obviously, not an option available to most low and moderate-income renters who have been priced out of the rental market.

Going forward, many questions remain as to how the city (and Metro) will provide affordable housing to the thousands of new and long-time lower income residents who have become increasingly vulnerable to the rising tide of gentrification and displacement. 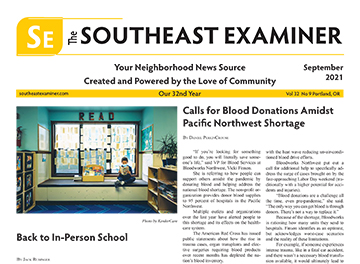