Just as Portlanders were getting used to the idea of three and four-plexes in their single family neighborhoods, a proposal surfaced to allow six-plexes.

Locals leery of the Residential Infill Proposal (RIP), may reel at the thought of additional densification. Yet a proposal by activists that would allow six-plexes if half were affordable is under consideration at City Hall as a way to address displacement.

The RIP draft has been in the works for four years as a solution to the City’s housing crisis and the anticipated arrival of some 240,000 new residents.

In response to concerns that neighbors would be priced out of neighborhoods if their homes and apartments were demolished, project planners are seeking ways to minimize displacement.

In addition to considering incentives for adding units to existing houses, the mayor’s office is evaluating whether six units would spur affordable development to help rehouse those forced to move, according to Project Manager Morgan Tracy.

At  recent SE Uplift land use meeting, Tracy seemed unsure whether the notion would gain traction.

The squeeze-more-in proposal comes on the heels of summer’s Legislation ending single family zoning in cities statewide. United Neighborhoods for Reform calls it a “luxe” housing bill sponsored by multi-dwelling developers.  The mandate beat Portland to the densification punch.

As planners spin multiplex housing in residential neighborhoods, it’s hard to argue that Portland needs affordable housing. Whether densification gets us there is a source of debate.

Virtually the entire City, affordable in 2000, is now beyond the reach of many today. About half of Portland residents are priced out of average rents of $1400 for studios and one bedrooms.

Even a unit in a six-plex could run $380K, surmised Tracy, price levels that  might attract builders but would still limit buyers.

As developers look for cheaper land to make the economics of construction pencil out, he indicated East Portland, with its large lots and lower costs, will become attractive for redevelopment.

Montavilla, Brentwood-Darlington and Lents, areas near I-205, are likely to be most impacted.

“The low hanging fruit has been plucked,” he said, adding that only sixty demolitions are anticipated in the SE areas.

After listening to the Tracy presentation, a wary Lents resident bemoaned her neighborhood’s lack of a grocery store, library and schools: “We’re screwed over once again.”

Determined to Infill, Portland has yet to address the environmental impact of construction. Tearing down houses wastes embedded energy and rips out tree canopies that reduce global warming.

Despite a robust economy, city government seems to operate in the red, cutting budgets and closing beloved programs. It seems incapable of making a dent in the homeless crisis.

A companion project called Better Housing by Design, which aims to add density to mixed use (formerly called commercial zones), has its own anti-displacement measures.

Its inclusionary housing program based on building size, requires a specified percentage of affordable units and it allows affordability transfer credits to other buildings.

A City initiative giving priority to families and individuals displaced by gentrification has been launched to help residents return to their old neighborhoods. Recent, less restrictive (and highly contentious) tenant polices and relocation fees are also intended to reduce displacement.

The RIP draft is available for review: portlandoregon.gov.bbs/67730 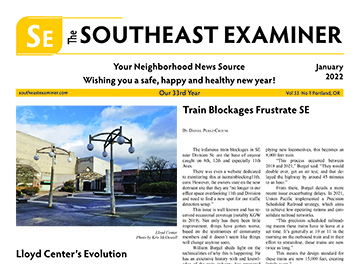