Teressa Raiford doesn’t pause for a breath. She has a lot to say, she’s passionate, has a sense of humor and a deep knowledge of Portland history.

She’s running for Mayor because she’s frustrated with the acquiescence shown by Portland leaders not showing up for community at times that civic participation is most needed.

Raiford lives across from a church in NW Portland. The steps are frequented by houseless individuals on rainy nights.

“We’ve got to resolve our housing issues,” she said. “You can’t do anything without a place to live.”

The Multnomah County Health Department’s annual review of homeless deaths found that during the 2018 calendar year, 92 people died in Multnomah County without an address or a home of their own.

All too familiar with this data, part of Raiford’s community advocacy as a non-profit leader is protecting, feeding and clothing houseless communities while advocating for legal referral services.

She has seen too many broken promises from entities like Portland Housing Bureau, which she believes is more committed to rapid development than to the people.

“I believe in restoration and rehabilitation while providing affordable housing and intergenerational housing,” she said.

A registered Democrat, and a fourth-generation Portland resident, Raiford was raised in a large family.

“I utilize my great-grandmother’s scrapbook and other archives to research discriminatory policies and laws in the city of Portland as well as the state,” she said. “Understanding how these policies have affected us and continue to do so matter when we talk about moving Portland forward.”

This is why she continues to speak up for those affected by infrastructure and rising developments that often leave people behind without a safety net. The biggest issue, she says, are these communities are not involved in the planning stages.

“During my campaign, we have spoken to Portlanders over the last 18 months about what matters to them and lots of people voice that they believe cannabis dollars in Portland would directly affect their livability,” she said.

In 2019, Oregon reported $725.8 million in revenue from recreational cannabis sales.

“Working within the industry, we are building a coalition of cannabis leaders who are willing to work within communities to redistribute these resources. We would like to see drug and alcohol counseling, housing support services and accessibility for safe access,” she said.

In her spare time, Raiford is involved in community art projects, working with children, families and the Portland Art Museum on projects that support social justice. 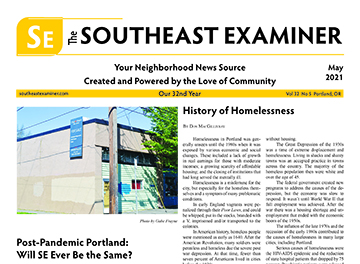