Fall is coming! I hope you all managed to stay cool and safe despite the heat, smoke and rising Delta variant cases this past month.

I have been putting information about those topics in my weekly newsletters and if you are interested in receiving those, reach out to me at rep.robnosse@oregonlegislature.gov. I will be happy to add you to my mailing list.

I will use this column to talk about an important process in our state that will be concluding at the end of September: redistricting.

Every 10 years, the US government attempts to get a complete count of every person in the country known as the US Census. Based on the Census data collected, states then redraw electoral lines for their legislatures and congressional districts to better reflect population shifts and growth, as well as changes in demographics to ensure fair and equal representation in government and allocation of resources.

August 12, we got census data that revealed population shifts in our state in the last 10 years. As you may have heard, for the first time in 40 years, Oregon has grown so much that it is getting a new congressional district.

In Multnomah County, our population grew by 10 percent since 2010, meaning we added approximately 80,000 people. The state changed dramatically demographically too.

Starting in mid-September, the legislature will take public testimony about how to draw new legislative districts as well as how to shift existing district boundaries to better represent the voices of the people of Oregon.

How districts are drawn impacts which voices and communities are reflected in our governments, who gets elected, and what policies are passed for the next 10 years. In other words, this process is very important. It sets the stage of a lot of things to come for the next decade in politics.

Here are some key dates: A special committee in the legislature will draw a draft of new districts September 3. September 8-13, the committee will take public testimony in person, via video or written and submitted on the draft.

After adjusting these maps to reflect public input, the committee sends them to a special session of the legislature. Once approved there, they will be sent to the Oregon Supreme Court September 27.

Should the committee and the legislature fail to agree to a map by September 27, Secretary of State Shemia Fagan will take responsibility for the state level map and the federal map would be handled by the courts.

Redistricting is incredibly important to our democracy as how the lines are drawn will determine a lot of with regards to representation in the US Congress and in the State Legislature where I serve.

A common misconception I want to clear up: legislators cannot just draw lines on a whim. There are criteria that must be met that will be legally upheld. Districts must be contiguous, compact, and keep communities of interest together to ensure their voice in our democracy.

If we don’t do this well enough, the districts can be challenged in Court.

As you might guess, I will be watching closely this month as these new maps get drawn and I hope plenty of you will make your voices heard in this process.

We only do redistricting every 10 years and it affects so much of what we do both here in Oregon and at the federal level, especially with this new congressional district.

As you may be aware this process in other states has sometimes been hijacked by the Republicans in charge to ensure they win elections. We will ensure that does not happen here. 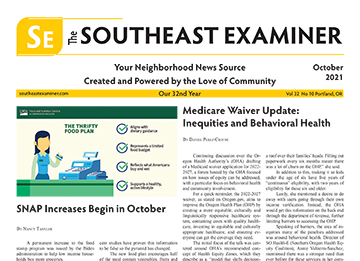