The new streetcar makes a stop at SE Morrison and Grand Ave.

With speeches, celebrations and two days of free service, the Portland Streetcar’s east side loop opened for business last month, amid a rain of sour grapes from critics.

At present there are two streetcar lines. The newest runs north from Portland State University through downtown, across the Broadway Bridge, through the Lloyd District and the Central East Side, via SE Martin Luther King Jr. Blvd. and Grand Ave. to the Oregon Museum of Science and Industry. An earlier route, from NW 23rd Ave. to SE Lowell St. in the Lloyd District, continues, giving double service to downtown.

There were a variety of events to mark the day. The Oregon Railway Heritage Center due east of OMSI held its grand opening. The Architectural Heritage Foundation offered an exhibit, “Streetcars Build a City,” on the development of early streetcar suburbs. There was a Community Showcase for businesses at the Oregon Convention Center’s new plaza.

The day began, however, at OMSI with speeches by a variety of dignitaries MC’eed by Mayor Sam Adams. “This is the first time in 61 years that a streetcar has crossed the Broadway Bridge.” Adams said.

He, Representative Suzanne Bonamici, Metro President Tom Hughes and Portland Development Commission Executive Director Patrick Quinton all extolled the project as a job generator as well as a transportation aid.

Adams said that 1,000 new east side housing units were in the development pipeline, five years ahead of schedule. Bonamici noted that the project had brought U.S. Streetcar of Oregon Iron Works $20 million worth of business.

Hughes said the new line, together with a hoped-for Convention Center Hotel, would bring major convention business to Portland. Quinton said that the line has brought $400 million in new private investment “to the east side alone.”

Blumenauer said the Central East Side was an area “in which people felt, and rightly so, that they hadn’t received their fair share of public investment,” remedied in part by the Burnside-Couch Couplet that Blumenauer helped find financing for.

Hanging over the festivities, however, was The Oregonian’s front page story, “A Streetcar Without Desire.” Reporter Joseph Rose argued that because of its slowness, the line would be more of a tourist attraction than a serious transit aide.

Earlier in the week, Steve Duin’s column said, among other things, that the line should have been built on SE Seventh Ave.. (Streetcar planners had considered and rejected this idea.)

Adams said his staff “has to deal with this kind of garbage every day.” Congressman Blumenauer said there had been similar disparaging remarks about the original MAX light rail line. “We have done this purposely, not just for this generation, but for generations to come,” he said.

PSU President Wim Wiewel said that in his native Amsterdam there are 25 streetcar lines and that “We are building for the next century.”

Still, Rose’s view isn’t a solitary one. Mark Taylor, co-owner of Portland Music, says of the streetcar, “I hope it brings us more business from downtown. People from hotels can hop on it and visit other places. I’m not expecting it to do much for business from indigenous Portlanders.”

In his speech, Powell’s Books owner and longtime streetcar booster Michael Powell praised contractor Stacey and Witbeck, and others who handled the construction. “Out of neighbors they make friends,” he said.

Taylor’s take on the project’s outreach is, “The workers were all civil, they’re not hard to deal with, they feign concern and cooperation, but make no mistake, they’ll do exactly what they want the way they want.”

For example, he says, “They asked me, ‘Do you want a stop here?’ I said, ‘Does it make a difference if I don’t?’ They said, ‘Not really.’” The stop “severely impacts the entrance to my store.” As for the construction impact, he says, “It will take us two or three years to recover.”

Indeed, the Central East Side as a whole was decidedly cooler toward the streetcar than the Lloyd District to the north, for understandable reasons. The high density development the car is supposed to bring, seen as a boon to Lloyd, was perceived by some as a threat to the CEI’s industrial sanctuary, bringing economic pressure for changes in use.

Longtime CEI leader Peter Stark wrote one of several rebuttals to Duin in defense of the streetcar; nonetheless, he told The Southeast Examiner, “We were never asked if we wanted it to come through here; we were told.”

As to the streetcar’s usefulness as a transit option, it is in a chicken and egg position now. Its current operating budget allows for east side service at the rate of a car every 18 minutes, well below the standard of once every 15 minutes.

Acceptance and good farebox revenue would allow for better service, but it is precisely the infrequent service that could keep usage down.

Executive director Rick Gustafson says, “The ridership over the next few months will be crucial for us.” 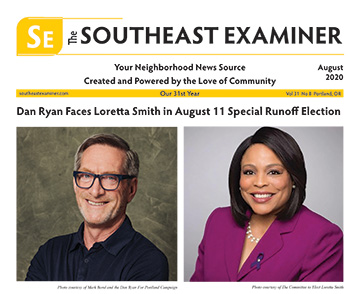