City Council unanimously voted for a five-year extension of the so-called “big tree amendment” levying significant fees for cutting down trees 36 inches or more in diameter on residential property.

In the event the Council declares a climate emergency, stiffer assessments for smaller trees could be imposed. Tree advocate Dawn Smallman praised Portland’s “most politically powerful environmental groups and youth activists” for packing the chamber for the vote.

Tree removal exemptions on commercial and industrial property will be considered by the Council this month and likely returned to Urban Forestry and the Planning Bureau for recommendations. The Council also indicated it would consider funding a comprehensive tree review.

Portland Audubon conservationist Bob Salinger welcomed the steps, but says they are not enough.

“The Mayor talks about the need for bold action on climate change. Removing the exemption for tree protection on industrial and commercial lands is an easy and obvious step toward this goal.”

For City Parks, the Council banned its 300 gas-powered leaf blowers in order to transition to battery-operated, hand-held tools.

Commissioner Nick Fish hopes residents will follow suit by deep-sixing their own use of gas blowers which emit carbon monoxide and cancer-causing toxins. He says some blowers release pollution equivalent to a Ford pick-up driving 4,000 miles.

The ban marks a victory for SE’s self-described Lorax, Albert Kaufman, who has been instrumental in circulating petitions to abolish what he considers “noxious equipment with noise levels equivalent to airplane take-offs.”

In other environmental news last month, the Council made changes to its Clean Energy Fund to try to make it less onerous for Portland’s workforce.

Meanwhile, Mayor Ted Wheeler and the Governor have joined the chorus calling for environmental review by ODOT of the controversial I-5 highway expansion plan through the Rose Quarter.

Both the City of Portland and Multnomah County have vowed to transition to 100 percent clean energy by 2050. Insiders say the City is behind on its Climate Action Plan goals, largely because of difficulties getting more people to reduce car trips and use public transit.

In late December, the City Council reapproved its ban on new fossil fuel facilities in the city. 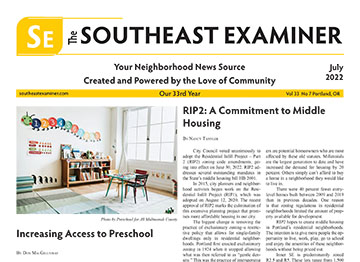